The Challenger is the player's character in both arcade Punch-Out!! and Super Punch-Out!! He does not have an official name, instead being named by the player. As this character, the player battles several opponents to become the WVBA champion. This green-haired character is noticeably different in appearance from Little Mac.

Based on appearances (primarily hair color), this character is possibly the same one used in Arm Wrestling.

When the begins playing the game, they are given a chance to name the character using a total of three initials. Then, they start by fighting Glass Joe, then Piston Hurricane, all the way to Mr. Sandman. After beating him, the player becomes the champion, and the game loops again until they lose the match.

In Super Punch Out!!, the same premise from its predecessor applies. The Challenger faces the same opponents in the same loop. However, when doing a rematch against an opponent, a bandage on their right eye will now appear, representing the wounds they sustained.

As indicated by the game's name, the player must arm wrestle against several opponents. First, the player has to earn points to gain power until they can pull their opponent's arm over for the win. Although the game doesn't refer to the layer character as "The Challenger," it is very likely he is the same person, both having green hair and a similar face shape.

· Challenger can punch Super Macho Man's back side of his head after doing his spin attack. This is not allowed, as a attack to the back side of the head would cause brain injury. 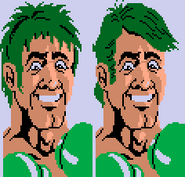 The Challenger in Super Punch-Out!! has neater hair than he does in the original Punch-Out!!

The Challenger holding up the WVBA champion belt.