Heike Kagero (平家陽炎 / へいけ かげろう Heike Kagerō) made his only appearance in the SNES version of Super Punch-Out!! as the second boxer in the World Circuit. He is a Japanese kabuki as well as a standard bishōnen and a spiritual successor of Great Tiger.

As Heike is of Japanese origin, in the Japanese release of Super Punch-Out!! his name is written in Japanese characters; being 平家陽炎 (or as written in Kana; へいけ かげろう). Heike, alongside Hoy Quarlow, are the only opponents in the Japanese version of the game to not feature their names written using characters from the Latin alphabet.

In Japanese, the surname appears before the given name, meaning that "Heike" (meaning "House of Taira", possibly in reference to the Taira clan) is actually his surname/family name and "Kagero" (meaning "Heat Haze" in Japanese) is his given name.

In the SNES version of Super Punch-Out!!, he sometimes swings his long hair against his opponent. He also does his "mirage dance," which is similar to the way Great Tiger moves around before throwing his jab combo in Super Punch-Out!! (arcade), but much faster. Every time he knocks down his opponent, he dances in the corner while waiting for his opponent to stand up. He wears pink boxing gloves, face-paint & women's boots, blue shorts and long gray hair. His palette swap is Dragon Chan. He, Mr. Sandman, Aran Ryan, and Super Macho Man are the only boxers who can get up at the count of 1 in Super Punch-Out!!.

His "mirage dance" will be done in between combos. Similarly to Don Flamenco, he will always throw a quick punch upon getting up. If he wins the match, he will brush his hair aside and run his glove in front of his neck along with him going "Woooo, hoo, hoo, hoo, hoo, hoooo!". If the player runs out of time, he will instead swing his hair three times.

Dizzy Knockdown: Heike leans to one side, then goes to the center. Hit him when he is centered. 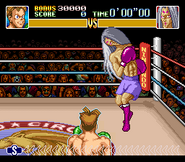