Little Mac (リトル・マック, Ritoru Makku) is the main protagonist in the Punch-Out!! franchise.

Little Mac is 17 years old, 5'7" (1.7 m) tall, weighs 107 lb (48.53 kg) and hails from the Bronx, in New York. He usually appears as a medium-built Italian-American man with black hair and blue eyes. He wears a black tank top, black and white shoes, green shorts and green boxing gloves. In the manual for Punch-Out!! (NES), he has a blue tank top and freckles.

His black hair changes between games from a short black ball cut in the NES installment to a standing-up hairstyle in the Wii one, which is either blue or orange depending on his model's textures. In Super Punch-Out!! however, he is now tanner, has blonde hair, wears blue shorts and no top.

In Super Smash Bros. for Wii U and 3DS, his design is more detailed, as he appears more muscular and tanner than in his Wii installment and looks more realistic, being drawn up in a similar fashion to the Fire Emblem characters and Legend of Zelda characters that are included in the game. His hair is also black instead of blue or orange.

He is interested in getting into the World Video Boxing Association. By chance, he met Doc Louis, who was a former heavyweight champion in his own right. He then began his journey to the top of the World Circuit, beating many other boxers standing in his path.

He does not have much development and not much is known about him or his personality, though he is shown to lack confidence and complain quite a bit between rounds, in a similar manner to Glass Joe. In matches, he is very good at punishing mistakes, using his size to his advantage to quickly dodge attacks and uses a defensive playstyle focused on dodging and countering. In Punch-Out!! for the Wii, he has clearly grown significantly in terms of motivation and willpower; if he wins without taking much damage, he happily celebrates his victory and, if he gets knocked down three times, it's possible for him to resist just before he falls to the ground up to twice per fight, showing that he is humble and very determined to show others they misjudged him. He also feels uneasy with his fans sometimes, as shown in Title Defense Super Macho Man's cutscene.

Little Mac's first appearance is actually in the NES version of Punch-Out!! Prior arcade titles starred a nameless green haired boxer who appeared looking older and taller. Judging from the newspaper right before The Dream Fight, Little Mac was born in 1970.

Prior to this game, Little Mac and Doc Louis met by chance one day. Doc began teaching him everything he knew about boxing. After immense training, Little Mac enters the World Video Boxing Association. After beating several circuits under Doc's guidance, he finally becomes champion after defeating Mike Tyson or Mr. Dream, depending on which version you play.

The taller, tan and blond boxer is stated to be Little Mac in some US promotional materials, and Nintendo News.[1] However this is never stated in any other advertising materials and the producers of Punch-Out!! for Wii claim it was a separate character.

If this is Little Mac, then he has changed his appearance completely in this game, with blonde hair. There is no sign of Doc Louis either. The blonde boxer enters the W.V.B.A. and again takes the title "Ultimate Champ" after beating Nick Bruiser.

After numerous battles, Mac climbs to the top of the W.V.B.A. and defeats the champion, Mr. Sandman, thus allowing Mac to become the new champion. However, all of his previous opponents want to try to defeat him and claim the title, thus Mac goes off to defend his title. He defeats all of his opponents and remains the Champ.

Mac eventually grows tired of his fame though, and after a small chat with Doc, begins his last stand, where if he loses three times, he'll retire.

After going for as long as the player can against all of the previous opponents (in their Title Defense strategies), Little Mac loses three times and retires. Doc visits a boxing museum and examines Mac's exhibit, containing images and trophies of his victories. After Doc looks at the same bike he rode to train Mac, he announces that he's proud of Mac and respectfully leaves. If he wins 10 matches before losing 3, he does not retire and you get Champion's mode, which can be used in Exhibition mode.

Giga Mac has so far only appeared in Punch-Out!! (Wii), as well as Super Smash Bros. for Wii U and Nintendo 3DS and Super Smash Bros. Ultimate as Little Mac's Final Smash. Unlike the fast and lightweight Little Mac, Giga Mac is a slow, hulking powerhouse, similar to King Hippo. Little Mac becomes Giga Mac after one of the players fills up a blue bar with Giga Mac Juice by punching the other player at certain times. His snarls, growls and roars are provided by Frank Welker.

Giga Mac plays like if the player was an opponent, similar to the ones from Career Mode. This is because when he shows up, the multiplayer split-screen becomes only one screen and in order to defeat Giga Mac, the other player has to dodge his attacks and then punch him.

Giga Mac has moves that range from a wind-up punch to a double-handed overhead strike. He can also earn stars just by posing and can also refill his blue bar, but it's recommended to use these when the opponent is tired, since both can be countered and (in case of the latter) deplete the majority of the bar. If the Giga Mac player doesn't do anything for a while, Giga Mac will face his opponent and roar at him, however, this doesn't actually help Giga Mac, as the other player can punch his face to get a star.

Giga Mac can actually get up faster than Little Mac, with the ability to get up as fast as the count of 2.

Instant Knockdown: Counter the taunt or the refilling move with a one-star or two-star uppercut.

Instant Knockout: Counter the taunt or the refilling move with a three-star uppercut.

Fitting his description as a typical fighter from the Bronx, Little Mac has very little infractions. But, as per the unified rules of boxing established by the Association of Boxing Commissions and Combat Sports:

In Fight Night Round 2, Little Mac (in his SNES incarnation) is a playable bonus character in the GameCube version of the game. He was included due to a licensing deal with EA to include Nintendo characters in some EA games for the GameCube at the time.

Little Mac appears in the Japanese-exclusive Wii game, Captain Rainbow. He has gotten very obese and you must get him back into shape so he can fight again.

Little Mac appears as an Assist Trophy. He appears on the stage and dashes around, punching and using uppercuts on enemies. The uppercut causes 25% damage and the normal punches cause high amounts of damage as well. He often falls off the stage, however. He also has a normal trophy as all other Assist Trophies do. In its description, it says:

"A lightweight scrapper from the Bronx. After meeting with a former boxing great named Doc Louis who fell from glory, Mac takes Doc on as his coach, and together the pair try for the championship belt in the WVBA. Little Mac works his way up the ranks of the WVBA, taking out foes several times his size. By landing multiple blows, Little Mac gains a "☆" uppercut."

In these games, Mac is a strong, fast, melee-based fighter that can make quick work of other fighters on the ground. By contrast, his aerial attacks and recovery moves are weak and cover little range, leaving him extremely vulnerable in the air. One of Mac's unique attributes is his K.O. Meter, a bar that builds up when Mac deals or receives damage. Once full, it alters Mac's standard special attack into the "K.O. Punch", an extremely powerful close-range uppercut that sends opponents flying, usually for a K.O. at higher damage. His Final Smash in both games is a transformation into Giga Mac. In Super Smash Bros. for Nintendo 3DS and Wii U, the player controls Giga Mac as an extremely powerful version of Little Mac who cannot flinch from damage and hits much harder with all of his attacks. In Super Smash Bros. Ultimate, activating the Final Smash causes Little Mac to transform and charge forward in a straight line and anyone caught in his range is automatically delivered a series of powerful punches and launched before Little Mac transforms back.

The "Boxing Ring" appears as a Punch-Out!! themed stage modeled after both the Major and World Circuit rings from Punch-Out!! (Wii). The ring itself is from the World Circuit, but the surrounding stadium seats matches the Major Circuit's stadium interior. There is also a Jumbotron screen in the back that views the fight in real-time and displays stats and exaggerated titles for two fighters in a similar fashion to the Punch-Out!! arcade game.

Along with the regular Little Mac trophy, Super Smash Bros. for Nintendo 3DS and Wii U features a trophy of Little Mac as he appeared in Captain Rainbow.

Little Mac appears in "World of Light" as one of the fighters captured by Galeem. His body is used to create puppet fighters for "spirits" to take control of. The real Little Mac is held in the city area, but the player must defeat the Great Zapfish spirit in the power plant in order to open the gate blocking access to him.

Little Mac is - assumingly - the playable character in the boss stage "Punch Out" in the game WarioWare, Inc: Mega Microgame$! and WarioWare Mega Party Game$. However, the player character seems to be a completely different person in WarioWare Gold.

In WarioWare: Touched!, the same Little Mac lookslike in the microgame "Button Masher", on its third level of difficulty.

In WarioWare: D.I.Y Showcase, Little Mac appears alongside Bald Bull in the microgame Punch-Out!! in localized versions of the game.

In WarioWare: Smooth Moves, he appears as a boxer in a micro game called "Punch-Out!!", where Mario must count down as a boxer (Glass Joe) gets down.

Little Mac as he appears in Super Punch-Out!!

Little Mac and Doc Louis in the NES version of Punch-Out!!

More art from Punch-Out!! (Wii), this time for the American box art.

Little Mac in his pink tracksuit, training with Doc Louis.

Little Mac on the in newspaper with Mario 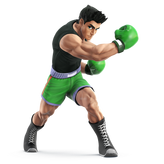 Little Mac in Super Smash Bros. for Nintendo 3DS and Wii U.

Giga Mac in Super Smash Bros. for Nintendo 3DS and Wii U. 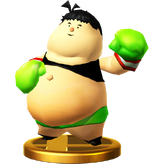 Little Mac's Captain Rainbow version as a trophy in Super Smash Bros. for Wii U

Little Mac after winning a match in Punch-Out!! (Wii) 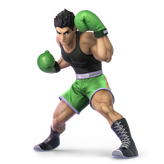