Mad Clown (マッド・クラウン Maddo Kuraun) is a traveling circus clown who decided to take up boxing. He made his only appearance in the SNES version of Super Punch-Out!! as the third boxer in the World Circuit as well as the #1 for the World Circuit Championship.

According to the manual for Super Punch-Out!! (SNES), Mad Clown was originally an opera singer. After having a nervous breakdown, he abandoned his singing career to join the circus. The monotony of performing the same juggling routines night after night, combined with being forced to drive a car that was much too small, prompted him to take up boxing.

Mad Clown juggles and throws six juggling balls at his opponent. Like his palette swap Bear Hugger, his stomach becomes invulnerable to body blows and uses hugging attacks. He has very high defense and power. After two knockdowns, his cornerman shouts "Show Time!" Mad Clown gets more aggressive and does three jabs along with a hook. However, he doesn't defend himself against the player's punches. Most of his punches can be countered by a counter-punch to the face, allowing the player many opportunities to get in some strong hits.

When he performs a juggle, wait until he does his hugging attack and do a precisely-timed uppercut.

Dizzy Knockdown: Mad Clown will move right, then left, then to the center. Hit him when he is centered. 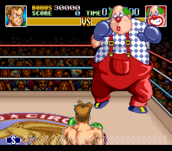 Mad Clown in the ring

Mad Clown getting up to fight.