Narcis Prince (ナルシス・プリンス Narushisu Purinsu) made his only appearance in the SNES version of Super Punch-Out!! as the first boxer in the Special Circuit. He is a vain British ivy-leaguer. His name is a play on narcissist, and he is one of two boxers in the game to not have a palette swap (the other being Hoy Quarlow) and three overall (the third being King Hippo).

In the SNES version of Super Punch-Out!!, Narcis' normal fighting style is noticably more skillful than some of the earlier opponents, as he tends to balance defense with offense, dodging and blocking often, and is capable of countering failed attacks to his face.

Alongside his above-average defense, His standard punches are also reasonably powerful, and is also armed with a dangerous combo which consists of three very quick and powerful jabs to the face, which when all the jabs hit, can take off up to 3/5 of your boxer's health.

Narcis will always block punches to his face, however when he throws an uppercut, the player will then need to dodge and punch him in the stomach and will finally get the chance to punch his face. But soon after, he will stumble away and will soon become enraged. While angry, Narcis attacks in a blind rage, flinging punches recklessly. In this state, his face is open, which is helpful since face punches inflict a lot of damage to him. When he recovers before the 10 count, he may cover his face with his fists and an exclamation mark will appear over his head, afterwards he shakes his head in order to snap out of his rage. However, his widened eyes and opened mouth are still visible during this stance. This indicates he has calmed down.

However, the price to pay is that his attacks become noticably faster and more powerful. If either boxer stays on their feet long enough, Narcis' corner man tells him to calm down after about 20 seconds, causing Narcis to return to his normal fighting stance.

When he knocks down his opponent, he leans against one of the corner posts whilst tapping his foot, waiting patiently for him to get back up. Narcis laughs at your boxer if he wins by KO. If he wins by time up, he throws some punches.

Dizzy Knockdown: Narcis Prince will sit down. Hit him when he does that.

Despite being British, (Britain being the nation that created and perfected modern day boxing) Narcis does have a few infractions under his belt at the ripe age of 20. 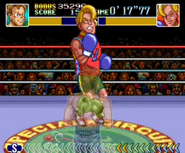