Punch-Out!! (パンチアウト!!, Panchi-Auto!!?) is a 1984 boxing arcade game by Nintendo. It was the first in a series of successful games that produced an arcade sequel known as Super Punch-Out!!, a spin-off of the series titled Arm Wrestling, a highly popular version for the NES originally known as Mike Tyson's Punch-Out!!, and Super Punch-Out!! for the SNES. The arcade game introduced recurring video games characters such as Glass Joe, Piston Hurricane, Bald Bull, and Mr. Sandman.

In the game, the player assumes the role of a green-haired boxer, known by three initials the player chooses when the game begins. During matches, the player's boxer is viewed from behind as a wireframe (so the opponents can be seen). The player must time his punches, dodges, and blocks in order to defeat the opposing boxer. Hints are given as to the opponents next move by subtle eye changes (the white of the eyes turn from white to yellow), but the player must ultimately predict what moves the opponent will make and react appropriately. The opponents are in order: Glass Joe, Piston Hurricane, Bald Bull, Kid Quick, Pizza Pasta and Mr. Sandman. After beating Sandman, the cycle repeats. On each successive round, the opponents are harder and quicker. The player only has one round to land a KO. Technically, there is no TKO element for multiple knockdowns, but the "3 knockdown rule" is utilized nonetheless; no boxer ever gets up from his third knockdown. Additionally, a win by decision is not possible; an automatic loss occurs if time runs out. In the event the player loses, the computer controlled victor will taunt the player and the corner man for the player will try to entice the player to play again ("Come on, stand up and fight!") via the game's distinctive digitized speech. Players are only allowed one continue per play through. Like many games made during the Golden Age of Video Arcade Games, there is no actual ending and continuously loops until the player loses.

The game is a modified upright and was unusual in that it requires two monitors, one atop the other, for the game's display. This was done because Nintendo purchased too many arcade monitors and needed a way to get rid of some. The top monitor is used to display statistics while the bottom one is the main game display, similar to Nintendo's Multi-Screen Game & Watch titles and the Nintendo DS. Apart from this, the game is more or a less a standard upright. The game has a joystick and three buttons. Two buttons control left and right punches, one for each arm (denoted by "Left!", or "Right!" when hitting the head, or "body blow!" when hitting the body with either arm). A large button on the console is pressed to deliver an uppercut or right hook, though the blow can be delivered only if a certain number of normal punches are landed on the opponent so that the "KO" indicator on the display reads full. When the indicator reads full, it flashes and the corner man's digitized speech encourages the player to either "Put him away!", or "Knock him out!".

During the same year, an arcade sequel to Punch-Out!! titled Super Punch-Out!! was developed and released by the same company, which has fewer, but tougher boxers to fight against. In 1985, a spin-off called Arm Wrestling was developed and released in the arcades only in North America by the same company, which is based on real arm wrestling. In 1987, the growing popularity of the NES caused the development and release of Mike Tyson's Punch-Out!! for the NES console to happen. Several elements, such as opponents and their names, were changed for this version. In particular, professional boxer Mike Tyson was added as the game's final boss to promote his success in becoming a champion. The home game's graphics and gameplay are also significantly different, to the point it cannot be considered a direct port of the arcade Punch-Out!!. In 1990, when the contract licensing the use of Mike Tyson's name in the console version expired, Nintendo replaced Mike Tyson with an original character named Mr. Dream, re-releasing it as Punch-Out!! (a.k.a. Punch-Out!! featuring Mr. Dream). Like Mike Tyson's Punch-Out!!, Punch-Out!! featuring Mr. Dream bore no further resemblance to the arcade version. During its release, the Game & Watch game called Boxing was re-released as "Punch-Out!!", which used the front box art of the Mr. Dream version as its package art. In 1994, a SNES title, Super Punch-Out!! was developed and released. It was far more faithful to the arcade stand-up gameplay; however, it was not a direct port either.

Other appearances in media[]

Another flyer for the game. 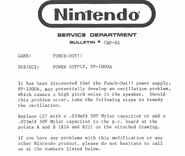 A Nintendo service bulletin for this game.

The date of this bulletin.