Mario is Nintendo's mascot, originating from the original Donkey Kong arcade game. Later on, Nintendo decided to add Mario in Mike Tyson's Punch-Out!! as the referee. Mario is mentioned during Little Mac's discussion with Don Flamenco when he makes a comment about Mario's hair. Instead of his usual overalls, Mario is seen wearing a white, long sleeved shirt with black pants. And he had his red cap. 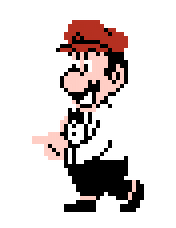 Retrieved from "https://punchout.fandom.com/wiki/Referee_Mario?oldid=17155"
Community content is available under CC-BY-SA unless otherwise noted.