Rick Bruiser (リック・ブルーザー Rikku Burūzā) is the secondary antagonist in the SNES version of Super Punch-Out!! as the third boxer in the Special Circuit. He is the younger Bruiser brother, as he's possibly in his early 20's but no less monstrous in appearance. His only loss came at the hands of his twin brother, Nick Bruiser, in which both brothers were made to fight as there can only be one champion. The game guide stated that for this one defeat he is very ashamed and will take out his aggression on any contenders that cross his path, contrasting with the good-natured persona he shows in the game. In the game itself, however, Rick Bruiser claims he let his brother win.

In the SNES version of Super Punch-Out!!, he usually tries to counter-punch and sometimes jumps in the air while throwing a powerful punch. This attack is called 'Earthquaker' which he jumps to the center of the ring, then he jumps and shakes the ring where the player can't move, then he throws a uppercut that will instantly knock down the player. He is nearly identical to his older brother, Nick, with the exception that he is slightly more pale, talks a lot more, is slightly less difficult and uses a southpaw stance instead of his brother's orthodox stance. He also smiles and wears an earring. He's one of the strongest opponents in the game and has very high defense. 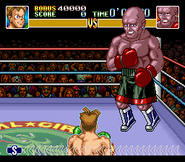