This article is a quality article.

His offense is similar to that of Soda Popinski (being in most his 2D appearances he was in, he was a palette swap of Soda Popinski) with big uppercuts and hooks, except he has his own attack, the clothesline. He utilizes two versions of this punch; for the first one he simply spins around 360 degrees with his arms outstretched and throws a quick haymaker at Little Mac. The second is a stronger one that occurs once he gets up from being knocked down; this time he moves back a bit and then keeps spinning around seemingly until Mac can no longer dodge. Like the Bull Charge of Bald Bull, this one can also floor Mac in one strike.

In the picture during profile mode in Mike Tyson's Punch-Out!!, Super Macho Man is tanned and has grey hair. But in the actual game, he has pale skin and black hair. This inconsistency in appearance only occurs in the NES versions (due to limitations of the time).

The music played for Super Macho Man in Punch-Out!! (NES) (also used for Von Kaiser and Great Tiger) is a quote from the classical composition "Ride of the Valkyries", though in the Wii version of Punch-Out!!, it is a short piece of music reminiscent of surf music. Super Macho Man was also featured as a Hasbro action figure, in a Topps trading card series and in Valiant Comics Nintendo Comics System, appearing in the story "Fox and Hounds."

Super Macho Man's first appearance was as the WVBA World Champion in the arcade version of Super Punch-Out!! in 1984. He's extremely strong and uses a 360 degree punch to defeat the player. This attack will knock the player down and the only way to avoid it is by ducking. He fights a lot like the other fighters except that he punches a lot more often, and he'll use his spin punch a lot. Before the fight, he does his spin and flexes his muscles at the screen. His Palette swap is Vodka Drunkenski.

In Mike Tyson's Punch-Out!! Super Macho Man became World Circuit Champion. His attacks are similar to Soda Popinski's. He will spin around 2-10 times in a row when he does his Super Spin Punch, but it doesn't require the player to duck as in all of the other Punch-Out!! games. His attacks are much slower than they were in Super Punch-Out!!, however. He is the last opponent in the gold Game Pak version.

Super Macho Man is a palette swap of Soda Popinski, with whom he shares his laugh.

He once again returned in Super Punch-Out!! as the World Circuit Champion. He's weaker than in the previous games. He attacks almost exactly like in the old games but he uses fewer ordinary attacks and more one-hit knockdown attacks, as well using his training programs as attacks against the player. He is the palette swap of Masked Muscle and also holds the same W/L records as Mr. Sandman, with a total of 29 wins and 3 losses. A possible typo in this game is that when the player fights him in Championship mode, as well as in Time Attack mode, he is labelled "Super Machoman", leaving out the space.

Dizzy Knockdown: Super Macho Man will go back, and then forward. Hit him when he is centered.

Super Macho Man returns in Punch-Out!! (Wii) in the World Circuit, but for the first time ever, is not the World Circuit champion, only the #1 contender of the circuit. He mostly uses attacks that take a lot of effort to avoid and do a lot of damage such as his trademark attack, the triple clothesline which takes away half of Little Mac's health for every punch. He always uses three in a row and he'll say "Super... Macho... MAN!!" and his glasses will start to glow before using it so it's generally detectable.

In his slideshow, he is shown to be a popular boxer in Hollywood, constantly being followed by paparazzi and signing autographs while working out and going on dates. During battle, he even strikes a pose for his fans every now and then (even saying "Photo Op" before doing it) and Mac can earn a star if he punches him in the face while posing. It was also known that Super Macho Man was one of the people who was knocked out by Mr. Sandman during his rise to being the champion. (In fact, according to his win record in Career mode, Mr. Sandman was his only loss.) He will taunt you by yelling "Stay down!" if he knocks you down. If you lose to him, he will exit the ring on a helicopter.

He speaks with somewhat of a valley-boy lingo (which is reinforced by the fact that, when fighting him, the soundtrack has a surf music arrangement) and seems to think extremely highly of himself, believing that he can't lose to Little Mac. His voice is provided by Mike Inglehart.

Glitch: Do two frame perfect punches when he is about to do the triple clothesline (one to cancel his poses, another to cancel the clotheslines) and he will remain idle until the round ends or a star punch is landed.

After Super Macho Man finishes his Triple Clothesline, land 8 punches in a combo. When he leans to one side, land an opposite jab and he will twirl to the other side. When this happens land another opposite jab. Continue this pattern to knock him down. This trick does not work in Title Defense.

Super Macho Man returns in Title Defense to fight Little Mac once again and get the World Circuit belt. His appearance doesn't change that much except that his trunks change color to a darker blue. He has a new fighting scheme but his punches are pretty much the same as before except that he has increased attack speed and his punches do more damage. He taunts more often, but getting the star off all three taunts requires good timing and knowing when to attack. If Super Macho Man blocks before doing a taunt, he will counter with a Hook. His Triple Clothesline in Title Defense Mode is faster and much harder to avoid but it's still just and will knock you down immediately if you get hit. He doesn't have an Instant Knockdown in Title Defense. In the introductory slideshow, it is revealed that Little Mac has taken away Super Macho Man's spotlight and fame, much to his annoyance. However, if Mac loses to him, the spotlight goes to him now and he says, "Oh now you love me" as he steps away from the spotlight as it now follows him twice. At first, he says, "Well it's too late." but he suddenly says, "Maybe not!" as he proceeds to flex 3 times in the spotlight. However, when Super Macho Man becomes champion, the audience boos at him still on subsequent rematches.

Glitch: When he does his triple spin attack, instead of ducking the first time, throw a star punch. If it hits and is timed correctly he won't do anything except stand there and block your attacks until the next round. (Alternatively, dodge the first punch, then throw the Star Punch before his second punch. If timed correctly, the glitch will still occur.)

The Wii depiction of Super Macho Man appears as a summonable spirit in Smash Bros. Ultimate. He is tied with Giga Mac with the most powerful Punch Out spirit; a reference to his role as the WVBA World Champ in games before the Wii. 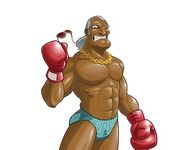