Super Smash Bros. for Nintendo 3DS and Wii U

Little Mac appears as a playable character using his redesign from Punch-Out!! (Wii). He is shown to be a formidable opponent in the ground, but a poor choice for aerial combat. He also possesses a Power Meter similar to the one seen in both the original and SNES versions of the game that, when full, will replace his neutral special making it a one hit K.O.. His moveset consists mostly of jabs and punches, and his punches can be altered depending of how they are angled.

Official Artwork for the game 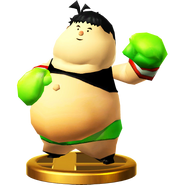 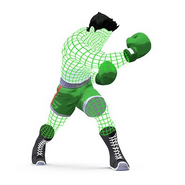 All 16 of Little Mac's palettes